2018 Concert Information Below
St. Petersburg Men's Ensemble Web Page Link
Led by Kiril Sokolov, the glorious voices of St. Petersburg Men's Ensemble will present "Credo, the Masterpieces of World Classic Choral Sacred Music and Traditional Russian Folk Songs".  The group's repertoire encompasses various epochs and styles - from ancient Russian chants and the chorals of Western European to modern music.  Since one of the tasks of the ensemble is popularization of preeminently Russian music, their program allows them to most fully elucidate and introduce the audience to Russian folk songs, secular and ecclesiastical compositions, as well as modern composers and transpositions of popular melodies. 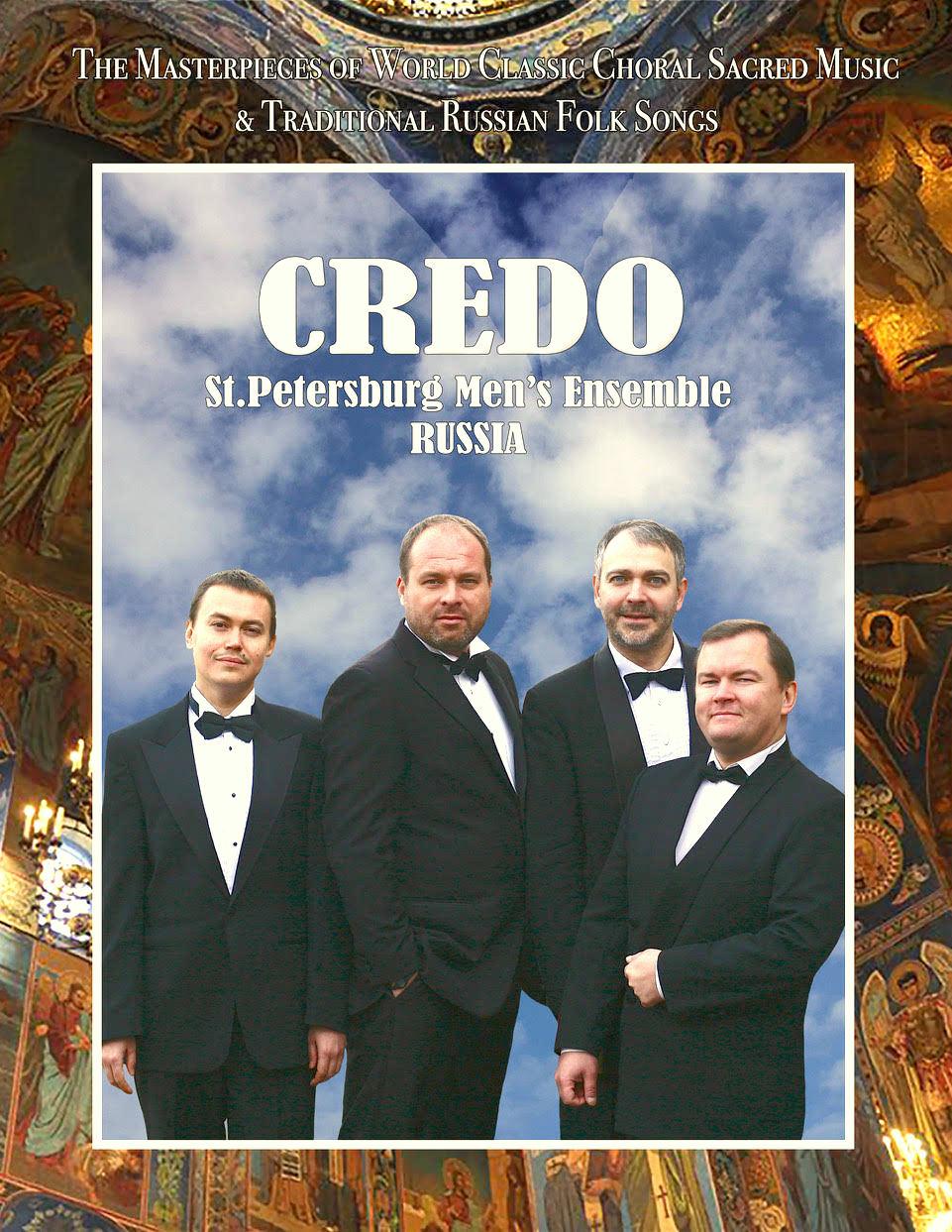 KIRILL SOKOLOV was born in Leningrad 22 July 1974 and received his first musical education in the Glinka Choir School attached to the State Academic Capella from 1991 to 1996.  He studied choir conducting under Professor E.P. Kudryavtseva at the St. Petersburg Conservatory. During 1995, he also studied voice at the Conservatory.  Since 1990, Kirill has been a member of several leading choirs in St. Petersburg: first the Academic Capella, then the Choir of Smolny Cathedral and the Chamber Choir of St. Petersburg.  In 1997 Kirill took part in concerts and performance tours as a member of several different music groups: “Soglasye” men’s choir, the “St. Petersburg Assemblies” chamber choir, “Otkrovenie” choir and others.  He was a leader of the “Petersburg Quartet” chamber ensemble from 2002 to 2003.  Since 2003, Kirill has been the leader of the “St. Petersburg Men’s Ensemble”.

SERGEY SHAPINSKIY was born 18 March 1972 in Kostroma on the Volga, has lived in Leningrad, now St. Petersburg, since 1979.  Upon completing Music School with a major in accordion, he played in the Bayan Accordion Orchestra in the Palace of Pioneers (now called the Palace of Youth’s Creativity).  From 1991 to 1993 Sergey studied music at the Teacher Training College.  Since 1993, he has performed with the choruses “Singing Bridge” and “St. Petersburg Serenades” and also the Choir of Smolny Cathedral.  He studied sound direction from 1994 to 1998 at the University of Cinema and Television.  From 1999 to 2010, he worked in a marketing agency.  Since the mid 90’s Sergey has been singing in Orthodox Church choirs in St. Petersburg.  Currently, he also works as a sound director in the music recording company “Melodia”.

ANDREI VOLIKOV was born 30 March 1984 in the city of Novosybkov, Briansk region, Russia.  He graduated in 2009 from the St. Petersburg Conservatory with a degree in Music at the A.I Herzen Russian National Pedagogical University.  Since 2007-2008, Andrei has been a soloist with the “Karambol” children’s musical theater in St. Petersburg.  From 2008 to 2010 he toured Europe with several different music groups: “Voskresenie”, “Youth Chamber Choir of St. Petersburg”, “Sheremeteff Ensemble”, 2009-2010 he performed with the Martinsky Theater choir.  Since 2009, he has sung as guest artist with the Moscow theater Maskarad (“Masquerade”) and has been an active member of the St. Petersburg Men’s Ensemble”.

VADIM SMANTSER was born 16 April 1974 in Partizansk in the Vladivostok area.  He graduated in 1986 from the Music School attached to the Minsk Conservatory. In 1992 Vadim became a member of the Choir of Smolny Cathedral and of the “Chamber Choir of the St. Petersburg Conservatory”.  He has also participated, since 1997, in various musical projects.  Since 2004, Vadim has been singing in the St. Dimitry Church choir and the St. Petersburg Men’s Ensemble.”